NATURE CAN'T DO IT ALL

How long does it take for our waste to decompose?

Plastic waste is choking our planet - polluting the air, water, and soil both people and all living things need. 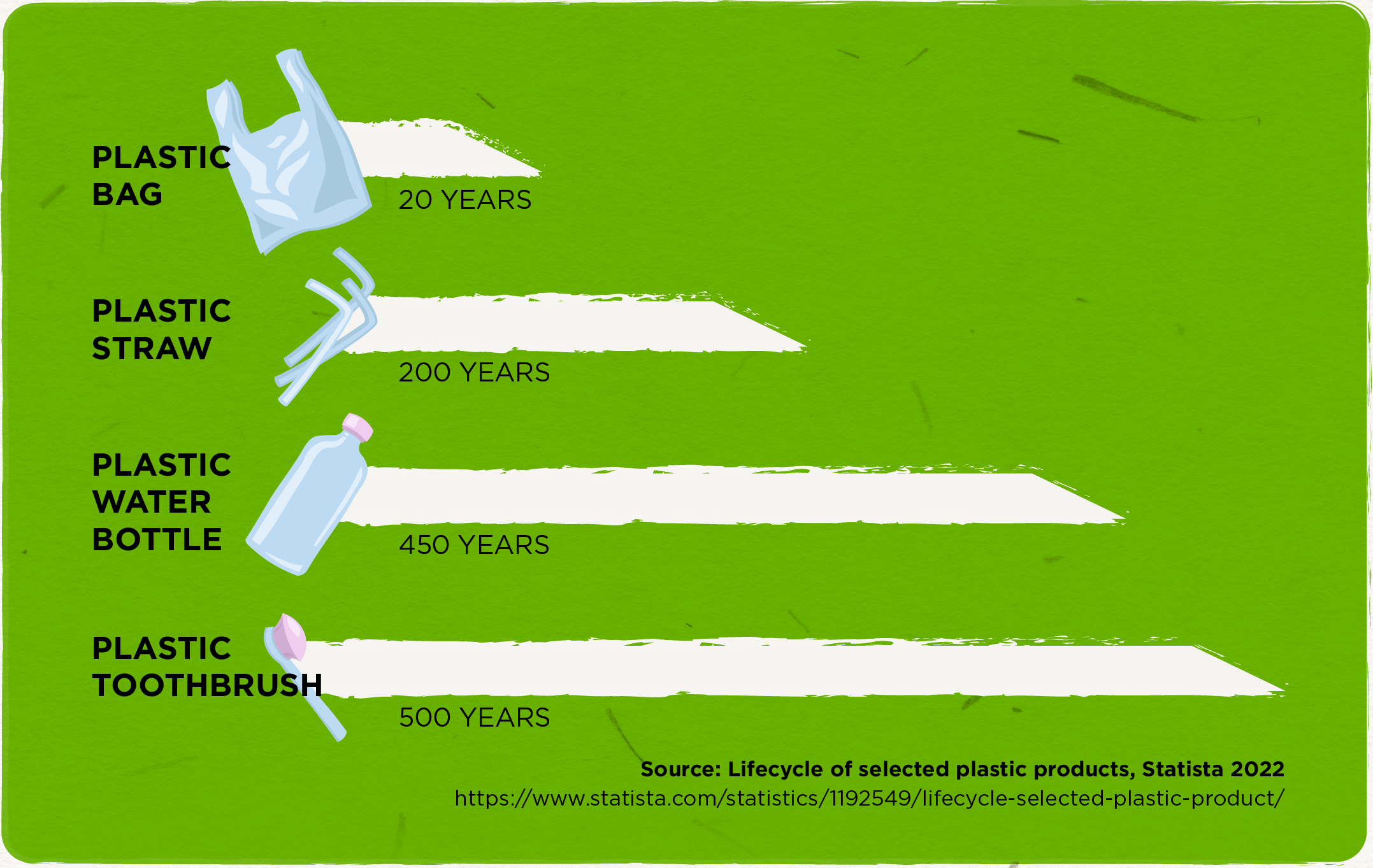 With the rapid development of the social economy and the increasing amount of waste and domestic garbage, the pollution is suffocating our planet. Among them, plastic pollution or the term "white pollution" has become a major factor in the global environmental pollution.


Since the invention of plastic in 1907, it has brought great convenience to people. However, the pollution and harm it causes are resulting in significant urban environmental consequences. Over the years, massive production, use, disposal and mismanaged plastic waste have caused an enormous impact on the climate, as well as on livelihoods and ecosystems. White pollution is a severe matter, and humanity's love for it may backfire if nothing has been done about it.

DO NOT LET OUR GREEN ENVIRONMENT GO TO WASTE

Most plastic bags are simply thrown out

Most plastic bags are made from polythylene that takes centuries to degrade, and less than 1% are recycled. Each ton of recycled plastic bags saves the energy equivalent to 11 barrels of oil.

A plastic bag takes up to 1000 years to break down. On average, a plastic bag is used for just 12 minutes.

We use 100 million tons of plastic every year, and about 10% of this plastic ends up in the oceans. An estimation of 300 million plastic bags every year end up in the Atlantic Ocean alone.

This year 5 trillion plastic bags will be consumed. It is equivalent to 160,000 a second, of which only 9% are being recycled. Put one after another, they would go around the world 7 times every hour and cover an area twice the size of France (about 3 times the size of Malaysia).


By 2050, there could be more plastic than fish in the oceans

A staggering 800 million tons leak into the ocean every year, and there are currently more than 150 million tons of plastic waste; By 2050, there will be more plastic in the ocean than fish.

We have always adhered to caring for the environment and sustainable development. From product development to the company's operation, we strive to reduce our carbon footprint and to be a more sustainable, resilient business. Over the years, not only did we promote health and physical wellness to our consumers, we are also converting our product's packaging to environmentally friendly material.


In 2015, we sucessfully launched 2° skincare series. The concept of 2° is inspired by the Copenhagen Accord reached by the United Nations Climate Change Conference in 2009.

One of the critical elements of the conference includes the agreement of all major emitters of greenhouse gases (GHGs) that global temperature increase should be kept below 2° C to reduce carbon emissions.


Furthermore, a report issued by the Intergovernmental Panel on Climate Change (IPCC) stated that, with clear benefits to people and natural ecosystems, global warming should be limited to below 2° C and could go hand-in-hand to ensure a more sustainable and equitable sociecty.


Return Legacy has taken the initiative by converting part of out products' packaging to environmentally-friendly materials and is working towards the journey to embed sustainability across all our products by using recyclable materials.

HOW MUCH PLASTIC DO YOU USE IN A DAY?

The use of plastics is deeply embedded in our daily lives, from grocery bags and cutlery to water bottles. But the quest for convenience has gone too far, and we are failing to use plastics efficiently, wasting valuable resources and harming the environment.

RL RECYCLE aims to recycle and reuse plastic waste to create a positive impact on our natural resources. We hope to raise awareness of environmental protection.

In every action we take, no matter how small, has the power to increase people's awareness of environmental protection, make a contribution to the environment, protect our beautiful Earth and achieve the goal of environmental sustainability.

Start now by recycling your empty bottle with RL RECYCLE. Let's all do our bit and make a positive difference! 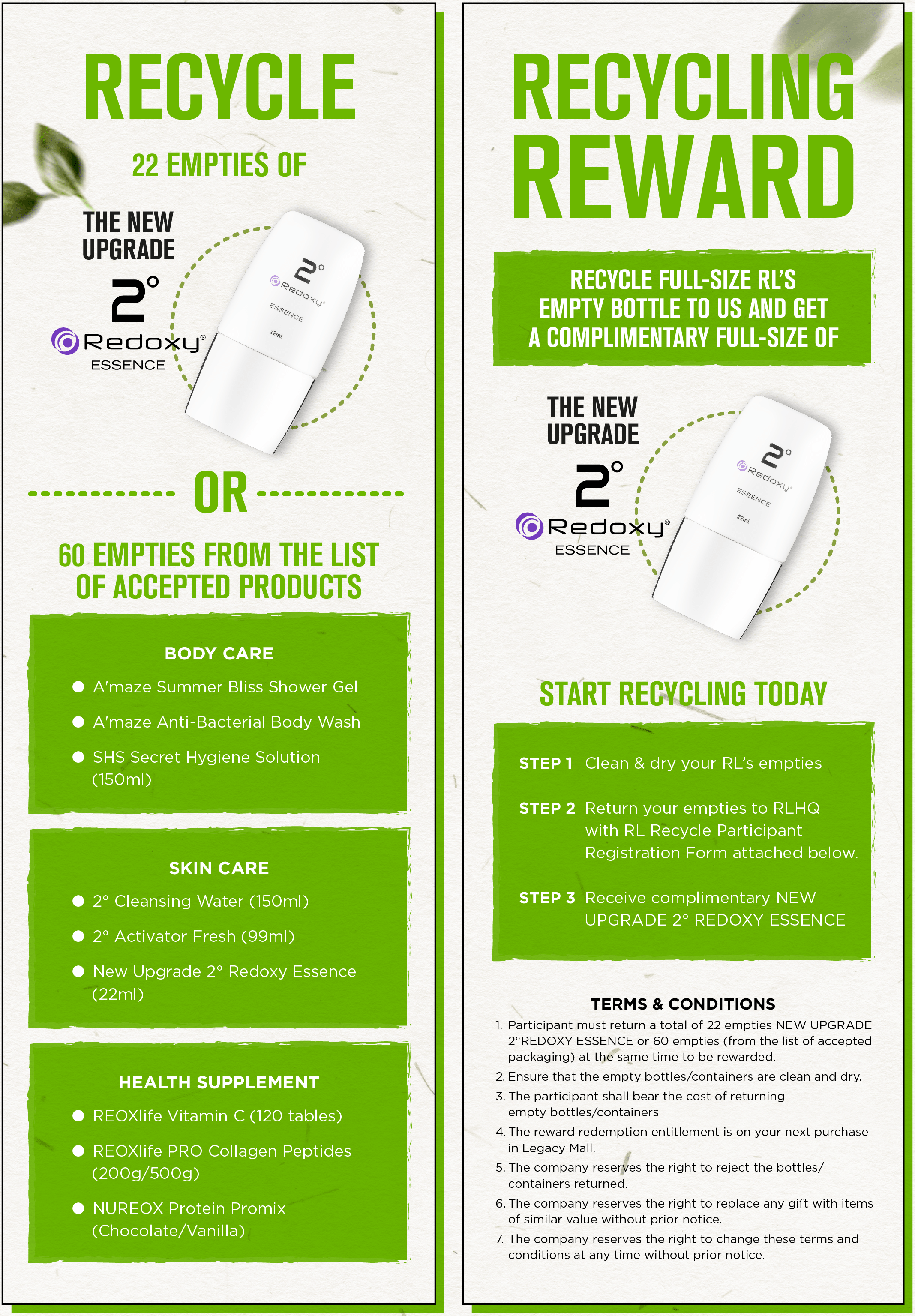